What could not of happened (but did)?

What could not of happened (but did)?

NB: if you’d prefer to read this piece in your browser, you can do so here.
“Life is a death sentence”.
Anonymous, 2020.
Dear Reader,

I hope wherever this writing finds you in the pandemic that you are in good health and in good spirits. Down here in Australia we navigate the same uncertainty that many of you in the northern hemisphere do, but we are blessed to be on the right side (literally) of the curve, with an R0 value currently less than 1. Since I last wrote 33 days ago, Australian case numbers have only increased from about 2,700 to 6,700, thanks to application of the precautionary principle. However, in this same period case numbers in the US have increased from 70,000 to over 1,000,000—how’s that for non-linear dynamics and multiplicativity?

But of course, Australia’s low numbers do not mean that it’s time to celebrate and ‘return to normal’. As I’ve said many times before, there is no normal: there are only multiple, interconnected dynamics continuously unfurling and unfolding across one another at different speeds (some slowly, at barely perceptible speeds; others too quickly to appreciate). And besides, time is an arrow, moving in only one direction. And as Stuart Kauffman deeply understands, dynamics beget things; things don’t beget dynamics. And as per the Second Law of Thermodynamics, a scrambled egg cannot be unscrambled. (Or if you prefer, ignore path dependency at your peril… but in the meantime, do yourself a favour and check out Stephen Wolfram’s Fundamental Theory of Physics to further your understanding of all of this).

Source: Dominic Lipinski/PA
Imagine travelling back in time six months to November 2019, being shown this somewhat-dystopian picture from Piccadilly Circus in March 2020, and being asked to hypothesise as to what might have happened. What might you guess? How would you approach this challenge? Where would you begin?

For those of you who had read Richard Preston’s 1994 book The Hot Zone  (this book will make you feel ill, I can assure you), watched Kevin Sodorburgh’s 2011 movie Contagion or listened to Bill Gate’s 2015 TED talk, you may have been predisposed to guess correctly. But even if you did correctly guess what had happened, you still wouldn’t truly believe it, would you?

The first known human case of COVID-19 was unearthed on November 17th 2019, and a number of novel coronavirus strains had been discovered in bat colonies a number of years earlier (and had no doubt been present for many, many millennia).  And so by mid-November last year, this pandemic was already well and truly underway. Our future* was already here, but none of us were aware of it. The dynamics had begun. There were processes set in train that were not yet evident; there were dispositions and propensities that were not yet realised.

* And this is why the present is not instantaneous, but rather is thick and dense, with multiple temporalities (within which we sit). This a key point to understand, and I cannot emphasise enough. Letting go of fixed goals and working with the evolutionary potential of the present means understanding that the future is already present (in the form of multiple adjacent-possibles).

This is the reality of the world we live in: multiple, interconnected dynamics continuously unfurling and unfolding across one another at different speeds, with processes already set in train, and dispositions and propensities already in existence.

Although this pandemic will be having an impact on your life (to a greater or lesser extent, depending upon which country and city or town you live in, and whether or not you’ve lost a loved-one to the disease), across a broader arc of time, the impact will seem less severe. Remember what I wrote in early March: what will feel stupid today will not feel stupid tomorrow.

Because just as predictable as this pandemic was (the specifics of course were less so i.e. country of origin, vector paths, government responses, the Ruby Princess debacle), something even more predictable is the inevitable outcome of a dense web of interconnected dynamics that are already manifesting in the form of catastrophic climate change.

Because when viewed across a different (longer) temporal scale, the future is already here. Analogously—let’s make months equal years—it’s early November 2019: the processes are already set in train; the dispositions and propensities already exist.

But let’s move along… to projections and plans

What did your plans for 2020 look like back in early November 2019? How different are those plans now?

In fact, even a mere nine weeks ago, you wouldn’t have been alone if you weren’t fully picking up the signals coming out of China, Iran and Italy. Check out these survey results from NAB’s February survey of business confidence: 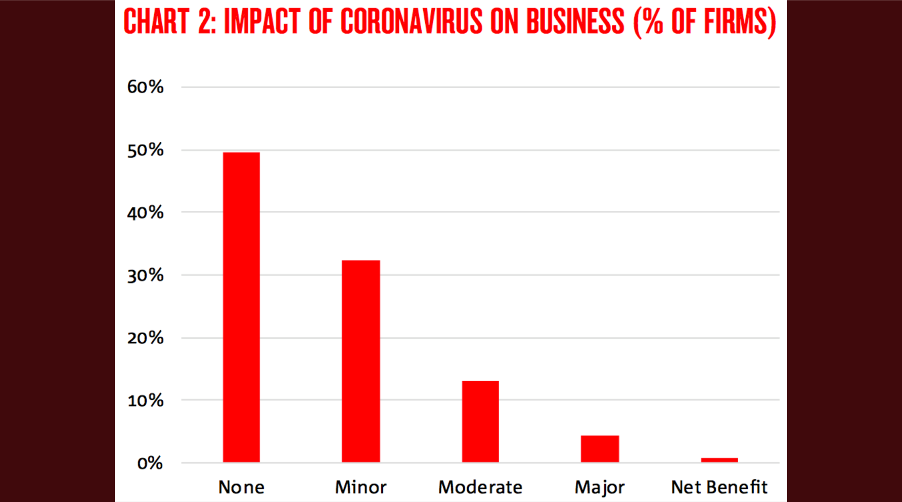 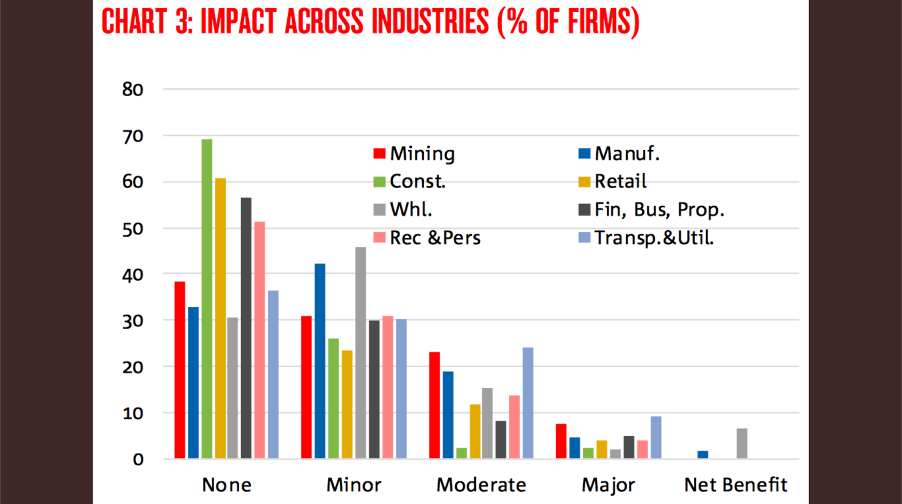 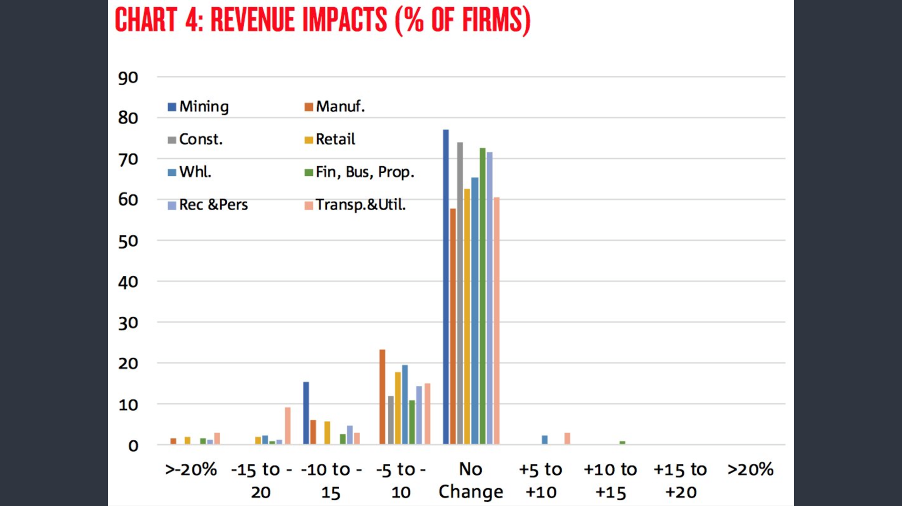 Half of all firms surveyed in late February 2020 predicted no impact to their business, with another 30 % predicting only a minor impact. (The stand-out industry exhibiting next to zero situational awareness was retail. 60 % of retail predicted the virus would have no impact with no hit to revenue, and twenty per cent predicted a minor impact via a 5-10 % revenue hit. And yet nine weeks later, kapow.)

We must contend with this reality: the utility of projection, prediction and forecasting in the linear Gaussian World (of which I have previously written about here, here and here) evaporates when pervasive connectivity becomes the norm, creating the multiplicativity of the Paretian World.

The systems we belong to nowadays are so interconnected and interdependent that they are now radically contingent, too. It is in the highly-complex and networked Paretian World where we firmly rub-up against this radical contingency.

If by the word ‘radical’ we mean exhaustive and complete and by the word ‘contingent’ we mean dependent-upon, when we talk about radical contingency we are talking about incredibly complex dynamics of feedback, recursion and layering and folding-back. These are the dynamics which cause shifts from the absolute causal outcomes and predictable totalities of the Gaussian World to the dispositional propensities and unpredictable possibilities of the Paretian World.

Radical contingency means that from even the smallest number of data points emerge an ever-expanding number of possibilities. Traditional organisational structures, strategies and naive empiricism (the conflation of thin and fat tails and its associated obsession with evidence-based analysis) does not understand the notion of radical contingency. Creative, imaginative free-thinkers, on the other hand, do. And yet creativity and imagination is—at least in western society—deemed to be predominantly a realm only for children.

To illustrate this point about radical contingency, let’s say we have four data points which have the potential to connect-to and influence one another. (These data points could be anything, ranging from something obvious and tangible—such as an acute weather or political event—through to something far less tangible—such as a societal trope, a zeitgeist, or the emergence of a mysterious new SARS-like, pneumonia-inducing virus).

The number of possible connections we can get from the four points of data is six—in other words, there are six different ways in which the data points can connect—and the total number of sequences of connections (or patterns) we can get is 64.

A situation where you have either four, ten or twelve data points which are isolated and independent from each other (i.e. disconnected, and therefore have no capacity to influence one another) is firmly located within the Gaussian World.

On the other hand, a situation where you have either 64, 35 trillion or 73.8 quintillion patterns resulting from the interconnections and interdependencies of the four, ten or twelve data points is firmly located within the Paretian World.

I do it because if you don’t have a grasp of this different Paretian ontology, you are a dead player.

There’s no debating this: if all of this is too hard to understand, you are a dead player.

If the live players do not step up… well, refer to my earlier paragraph under the subtitle A wake up call: we are f@cked.

And so the question that really matters here is this:

Are you a live or dead player? Seriously. Which one are you?

The limitations of the organisation (as a noun)

As you should by now be aware, our ‘modern’ approach to organising is actually a perversion: the verb (organising) has become the noun (organisation), just as working became work and processes became policy.

Fixed, rigid, inflexible things (i.e. nouns) are appropriate for the linear, additive and predictable Gaussian World of four, ten or twelve data points which are isolated and independent from each other.

However, they have a propensity to fail catastrophically when the radically-contingent non-linear, multiplicative and unpredictable Paretian World of 73.8 quintillion possible outcomes emerges. For this radically-contingent world we need fluid, flexible dynamics (i.e. verbs) and knowledge of the boundaries and constraints we have at our disposal to work with these dynamics.

That’s why my work preferences dynamics over things. It’s all that I do*.

* It’s just that soon—in fact, as of today—I will no longer be doing it under my own name. I’m stepping it up.

Complex adaptive systems as a theory of change

The response I nearly-always get from CEO’s in response to my work around complexity and network-science based approaches to organisational strategy, structure and management is this:

Nine out of ten dismiss me: they are most-likely the same CEO’s who predict no impact from a global pandemic in business confidence surveys, and who like to engage McKinsey consultants to tell them what to do.

The answer to the ‘so what’ question is that complex adaptive systems theory is the theory for change. A complex adaptive system is simply a system that learns from and responds to and coevolves with the other systems and the broader ecosystem to which they all belong to. That’s what every organisation should be able to do (unless they are simply hell-bent on growth at all costs, which is a dead player strategy that will rightfully kill them in the long-run).

We are surrounded by complex adaptive systems at all scales—from the communities of bacteria in our guts to the human communities to which we belong—and yet bizarrely, modern society is predicated on the false belief that human ingenuity—rooted in our understanding of Newtonian physics—is superior in every way, shape and form to naturally occurring complex adaptive systems.

* Humility and deference (years ago I used to describe these traits as core components of the ‘non-alpha male’) go a long way towards understanding complex adaptive systems theory as the theory for change.

The end of the beginning

In my last piece, I wrote this:

“Bringing this whole conversation back to the topic of system change, what this means is that if you’re trying to change non-physical spatial systems which feature high levels of connectivity and interdependency—remembering these traits are the hallmark of any human system—you musttreat them differently to how you would treat a physical spatial system. That’s why Newtonian physics and engineering are appropriate for building a house or designing an engine,but they just don’t cut it for non-physical spaces.”

This remains true 33 days later, and it will continue to remain true for a long time to come.

As the world enters a phase transition, and many of our systems begin to reconfigure anew, it is not the beginning of the end. Rather, it is the end of the beginning.

This why I went all-in over five years ago. What will you do?

(then let’s start a conversation)